Comments guitarist Kurdt Vanderhoof; “This album not only commemorates the reunion between Mike and the band, but it also pays tribute to some of the more popular songs of that era. It’s really cool to see so many old fans and new fans of all ages enjoying these classics as we perform them live, so it only made sense to release this”. Mike Howe adds “It’s an honor to be back and it makes me very happy to see that almost 3 decades later, fans are still enjoying these songs!”

On the subject of the “Fake Healer” duet with Todd, Mike Howe comments, “The idea came from the owner of our label Rat Pak Records (Joe). It was his idea to record this as a duet with Todd. It’s an amazing version and I think fans will be very surprised at how good it sounds!"

Queensryche singer Todd La Torre further comments, "Having been a fan of Metal Church since my early teens, never in my wildest dreams would I have ever imagined that the great Mike Howe would re-join the band! Getting the opportunity to record a duet to the track Fake Healer was beyond amazing!”

Metal Church Classic Live is currently available for pre-order via the Rat Pak Records website in various bundles including vinyl, signed CD’s and t-shirts and can be found at: www.ratpakrecords.com/metal-church 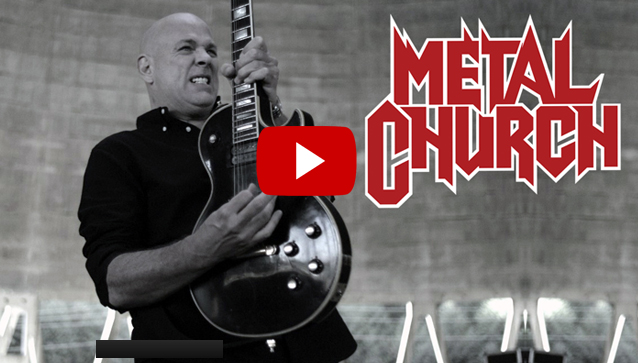 International Release Scheduled ThroughLicensing Agreement With
Nuclear Blast Europe and KING Records Japan
(January 5th, 2016 – New York, NY) – Hard rock titans Metal Church return with their latest album XI slated for release on March 25th via Rat Pak Records. Theband’s 11th studio release also marks the return of legendary vocalist and front man Mike Howe. The reunion between Mike and Metal Church started in July of 2014 when Mike started working with Kurdt Vanderhoof on a side project he was forming with Nigel Glockler from Saxon. Through these initial conversations, Kurdt convinced Mike to ultimately return to Metal Church. The idea was to see if they could recapture some of the magic from the 3 albums Metal Church released in the late 80’s: The Human Factor, Blessing In Disguise and Hanging In The Balance. Out of those sessions, XI was born andcaptures the sound that made the band fan-favorites in the 80‘s and mixes it with a new, invigorated sound for 2016.

“Sometimes I still can’t believe it myself, no one would have ever thought Mike would return after his departure almost 2 decades ago” says guitarist and founding member Kurdt Vanderhoof.

“At first I struggled with the decision to come back, but after hearing the riffs that Kurdt was writing, I just couldn’t resist, the music calledto me and I wanted to be part of it!” says returning vocalist Mike Howe.

Metal Church has also released an official music video for the debut single from XI, “No Tomorrow.” The video can be seen at: https://youtu.be/ary17dRnC3o and was filmed in the Satsop Nuclear Facility, an abandoned nuclear power plant in Elma, Washington. The video was directed by Jamie Chamberlin of Black Dahlia Films and features a unique visual that ties in to the location. A behind-the-scenes video on the making of the video for “No Tomorrow” was also recently released and can be seen here: https://youtu.be/Rr0bHRjfhmU. XI was produced by Kurdt Vanderhoof and co-produced by Chris “TheWizard” Collier.

Rat Pak Records has also teamed up with Nuclear Blast Europe through a worldwidelicensing agreement for distribution of XI in all territories outside of North America, South America and Japan. “We here at Rat Pak Records were very excited to receive a licensing request from Markus Staiger and his amazing team at Nuclear Blast Europe to release this new Metal Church XI into their international territories, ultimately insuring that this album will reach every corner of the globe,” states Rat Pak Records President Joe O’Brien. Markus Staiger adds: “We are happy and proud to welcome Metal Church, an absolute metal legend, to the Nuclear Blast Europe family! When the self-titled debut album was released in 1984, it was a revelation to me - that this was how heavy metal had to sound like - with killerriffs and plenty of speed! We will do our utmost to help re-establish Metal Church here in Europe and get them back where they belong - in the 'Champions League' once again!“ King Records will be overseeing the new Metal Church release throughout Japan. "We are very excited to be releasing the new album by Metal Church," adds “Ryo” Saito of King Records.